The Italian topography and the way it was perceived and represented changed in the postwar years, especially in relation to the unprecedented urbanisation and industrialisation of the country, and of the countryside specifically. In the light of these shifts, the immersive research conducted at the Fondazione Benetton Studi e Ricerche (www.fbsr.it) and the consultation of materials at the CSAC – Centro Studi e Archivio della Comunicazione (www.csacparma.it) appears strongly interrelated.

Timely instituted in 1987, more than ten years prior to the 2000 European Convention on Landscape, the Fondazione Benetton is a research centre dedicated to the study of land and landscape, history of games and, more generally, cultural heritage. It is located in Palazzo Bomben and Palazzo Caotorta in the historic centre of Treviso. The Fondazione supports new research and organises events about landscape governance and design. It also manages an innovative multidisciplinary library, where I spent more than two weeks, after having travelled to Rovereto, Venice, Florence, Milan and Lodi as part of my research supported by CIMA travel fellowship.

At the Fondazione, I became familiar with distinct approaches to the study of landscape (i.e. philosopher Rosario Assunto and anthropologist Eugenio Turri). More importantly, I consulted literature about Italian agriculture and its history, focusing on its industrialisation and mechanisation. These aspects are particularly relevant, I suggest in my study, for understanding not only the changing shapes of the Italian extra-urban landscapes in the postwar years but also the ways in which Italian artists, such as Pino Pascali (1935-1968) and Mario Giacomelli (1925-2000), responded to these transformations.

Mario Giacomelli, self-taught photographer of international reputation, had a life-long fascination with the landscape of this area, which was his native region. Since his very first photographs, he strived to capture the essence of this land and of his own relationship with it and its transformations. His work, along with selected projects by Mario Cresci, is what I had the opportunity to consult at the CSAC –  Centro Studi e Archivio della Comunicazione (Università di Parma), a research centre founded by professor Arturo Carlo Quintavalle in 1968, which today is located in the a Cistercian monastic complex founded in 1298 in the countryside north of Parma.

The CSAC, that hosted Giacomelli’s first monographic exhibition in 1981, holds a wide collection of photographic prints retouched, annotated and dated by the photographer. I was particularly interested in the works dedicated to the rural landscape. Seeing and handling these materials appears to provide invaluable insights into the artist’s modus operandi, especially in relation to his more abstract works from the 1970s and early 1980s. On the verso of a number of prints, Giacomelli himself briefly commented with notes, underlining either his intervention on the land or the use of a peculiar photographic effect, or both. Furthermore, viewing the images in close succession, it was possible to notice that several landscapes from the late 1970s were reprints of magnified details and rotations of previous works. Far more complex than a visual documentation of the changing topography of the country, Giacomelli’s landscapes reflect a sophisticated negotiation of farmers’ signs, his physical interventions on the land and an almost pictorial use of the photographic media. 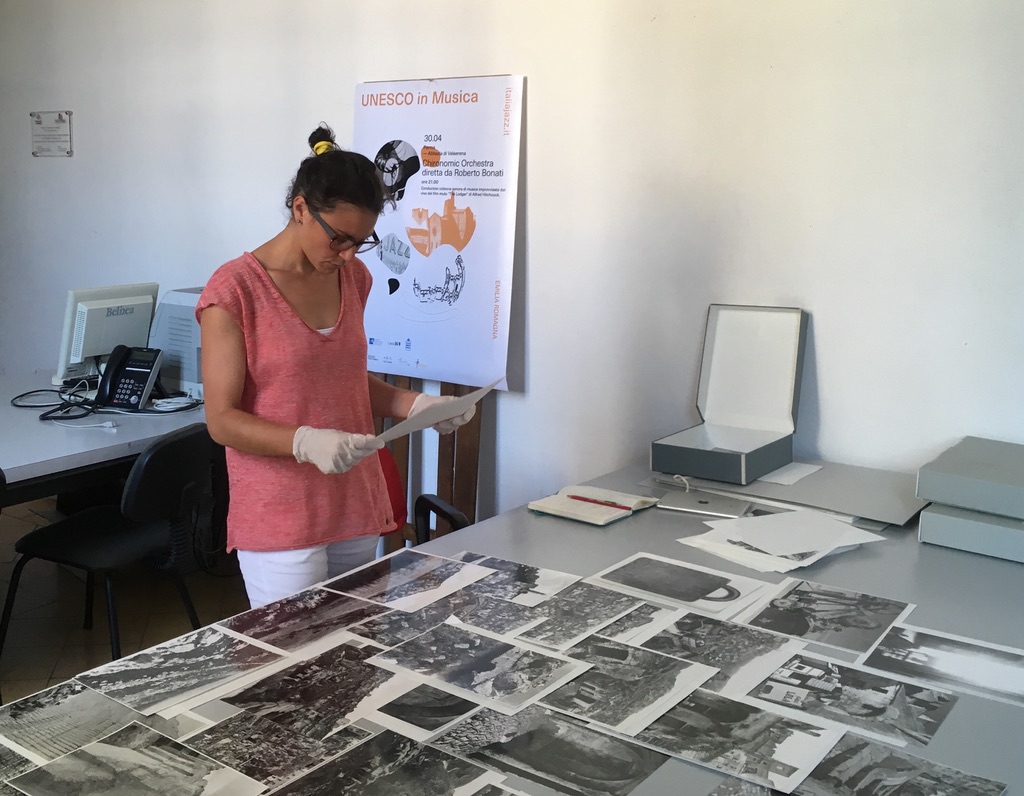