– Posing Modernity: The Black Model from Manet and Matisse to Today –

On February 6th, 2019, CIMA members were invited to visit the exhibition entitled Posing Modernity: The Black Model from Manet and Matisse to Today, curated by Denise Murell. The exhibition was hosted by the Wallach Art Gallery through February 10th and it will continue in Paris at the Musée d’Orsay, with the title Le Modèle noir, de Géricault à Matisse.

The Gallery is housed on the 6th floor of the Lenfest Center for the Arts, which is an arts venue designed for the presentation and creation of art across disciplines, providing a dynamic new space for Columbia University School of the Arts. This Renzo Piano building is becoming a major focal point for engagement in the rich cultural life of Columbia, Harlem and New York City at large.

Posing Modernity’s aim is to explore the changing modes of representation of the black female figure as central to the development of modern art. In particular, our visit was mainly focused on the comparison between different paintings in order to see how the social and historical context has affected the way the black female figure is represented by artists. 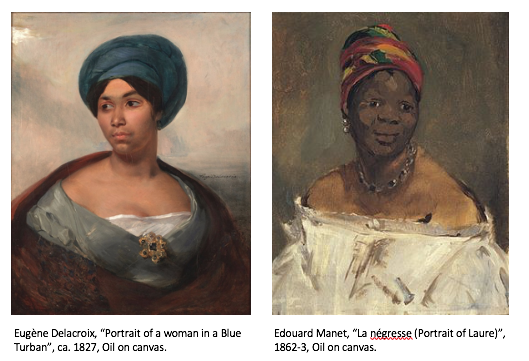 Between 1852 and 1860 Paris was subjected to a process of industrialization: les grands boulevards were created, as well as parks, squares, fountains and aqueducts. In this process of modernization, the limited black presence in Paris was expanding due to the 1848 abolition of French territorial enslavement. This context surely affected the focus of the artists paintings and the manner they represented subjects. This change is particularly evident in the comparison of two paintings: Portrait of a Woman in a Blue Turban by Delacroix, dated 1827 and La négresse by Manet, dated 1862–3. While Delacroix idealizes and romanticizes the subject, Manet paints the protagonist in a more natural way: she slightly smiles and even if her eyes are turned, she is aware of our presence. Consequently, the approach of the two artists is completely different and this shift in the representation clearly reflects the social historical context: black people are not anymore “strangers” but “someone walking down the street.”  In fact, the model represented by Manet was known at that time: Laure lived near Manet’s studio. However, the title La négresse shows that the model is still relegated to anonymity and racial stereotyping. 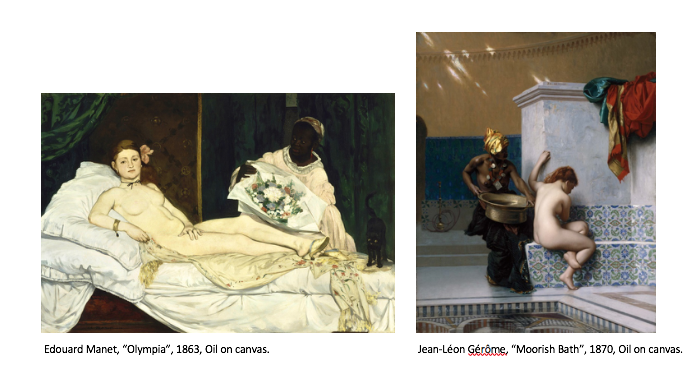 Even if La négresse can be already defined cutting-edge, the real shift happens with Olympia, the paint with which modern art begins. Manet chose to represent the model Laure in a painting modeled after Titian’s Venus of Urbino. Contrary to the latter, Manet’s Olympia looks directly at us in a provocative pose. However, what is really innovative is the protagonist role that the black woman covers, both in terms of space occupied in the painting and in her individualized expression.

More traditional is the Moorish Bath, by Jean-Léon Gérôme (1870), where stereotypes still persist. This work of art exemplifies the seductive visual opulence of Orientalist paintings, of imaginary harem scenes set in colonial North Africa or the Ottoman Empire. The servant displays her bare breasts, muscular arms, and jewelry that define portrayals of the black female body in this genre. 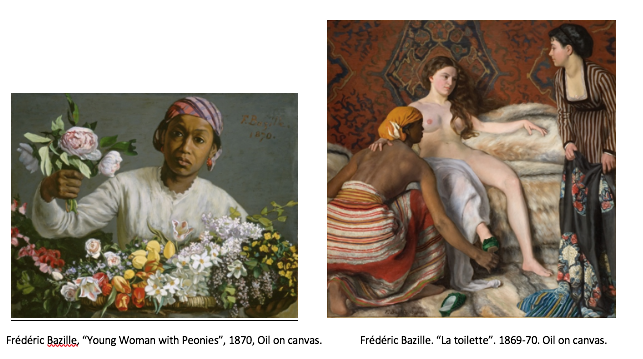 Manet’s Olympia also inspired Frédéric Bazille’s Young Woman with Peonies, where this household servant is not sexualized or idealized, but has expression lines on her face, and is presented as a modest, industrious, and stylish member of the Parisian working class. Bazille vacillated between his desire to follow Manet’s exhortation to depict scenes from everyday life, and his mastery of the Orientalist style favored for submissions to the Paris Salons. This vacillation is visible in La toilette, in which the same model from Young Woman with Peonies assumed the archetypal role of the exotic black servant, nude to the waist, and in an imaginary opulent harem. 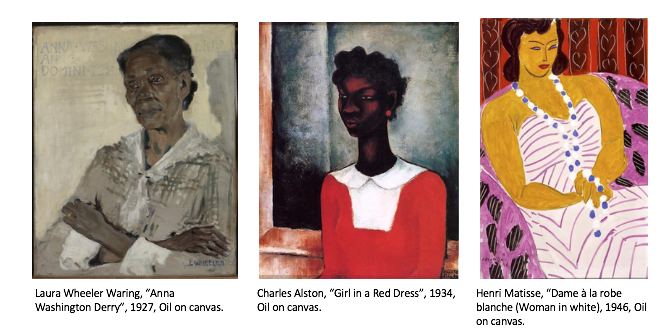 During the 20th century, both Europe and the USA begin to be interested into African Art. Following the mandate of the movement’s philosopher Alain Locke to counter racist stereotyping, artists like Charles Alston and Laura Wheeler Waring portrayed African American subjects in varying styles to introduce an urbane “New Negro” mode of portraiture. This is visible in the two portraits Anna Washington Derry and Girl in a Red Dress, where female figures are humanized.  In Laura Wheeler Waring’s portrait we even explicitly are given the name of the model, and she is expressively represented. We can understand her strength from her expression and determination from her body language. Unique is the fact that she has a shadow: for the first time, the black female physical presence is established. Moreover, because the model was a family friend of the painter, there is a change in perspective: behind this portrait there was a real knowledge of the individual who was being depicted.

Following his New York visits, Matisse created dozens of portraits that manifest a stylistic and thematic affinity with the urbane “New Negro” portraiture style of the earlier Harlem Renaissance. These portrayals assert a novel, international mode of depicting women that became a beacon for subsequent generation of artists. In Dame à la robe blanche, the female subject shows strengths and power, dominating the space in the painting. 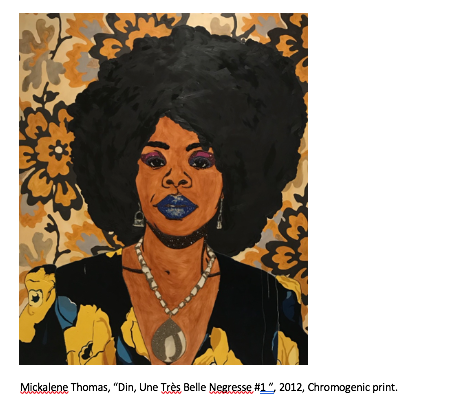 The exhibition tour concluded with a look at Manet’s and Matisse’s legacy, which continues to reverberate for diverse postwar and global contemporary artists who explore the multiple voices of art history, incessantly pushing boundaries and trying to cross new limits. An example is the amazing print Din, Une Très Belle Negresse #1 by Mickalene Thomas. This woman is the star of the painting: she shows confidence and boldness. Her fearless look leads loosely back to Manet’s Olympia, while the explosion of materials, colors, patterns, and the experimenting of techniques call to mind Matisse.