As part of the MARINO MARINI STUDY DAYS, CIMA is pleased to welcome Prof. Robert Slifkin to present his keynote from 6pm – 8pm:

This lecture will consider Marini’s nudes alongside a body of sculpture created after the Second World War by artists such Raoul Hague, Jasper Johns, Joan Miro, and David Smith in which pitted and mottled surfaces (often produced through the relatively novel technique of direct metal welding), irregular and coarse patination, and figural fragmentation invested the works with signs of simulated dilapidation. These artists’ works, with their invocations of classical ruination, coupled with occasional allusions to industrial technology, served as strident — if paradoxical — imaginary harbingers of what the current world would like after the next war by evoking signs of destruction and dilapidation that were traditionally associated with the archeological past. This complex temporality in which an array of antiquated pasts contend with an ever-changing present aligned such practices with the traditional form of the monument and moreover took on a trenchant significance in the years following the Second World War when the menace of nuclear weapons threatened to return civilization to a state of prehistoric barbarism.

Robert Slifkin is an Associate Professor of Fine Arts at the Institute of Fine Arts, New York University. He is the author of The New Monuments and the End of Man: U.S. Sculpture Between War and Peace, 1945-1975 (Princeton University Press, 2019) and Out of Time: Philip Guston and the Refiguration of Postwar American Art (University of California Press, 2013) which was awarded the Philips Book Prize. His essays and reviews appeared in such journals as Artforum, American Art, Art Bulletin, Art Journal, Burlington Magazine, October, Oxford Art Journal, and Racquet.

Free for students and CIMA members.

The event is part of the MARINO MARINI STUDY DAYS and will be preceded by a prosecco aperitivo at 5pm. Presentation begins at 6pm, followed by a Q&A. 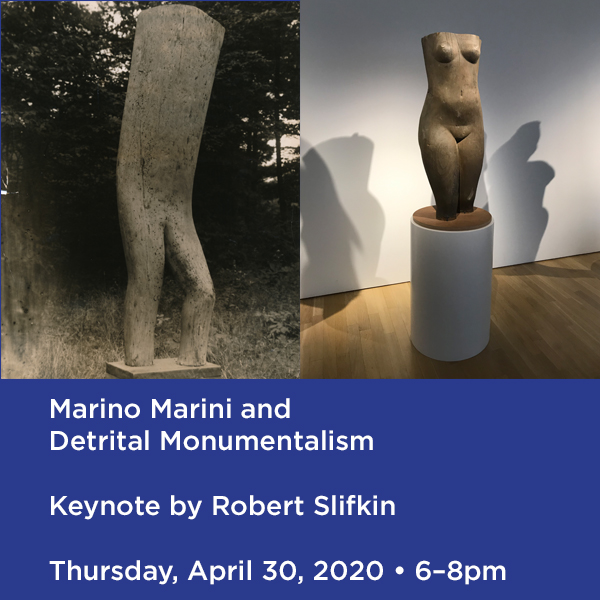