This exclusive conversation, part of a broader series titled Schifano and Friends, will explore Dacia Maraini’s long friendship with artist Mario Schifano, the cultural circles of 1960s Rome, and the poem and interview that Maraini dedicated to the painter over the years.

Dacia Maraini is an Italian novelist, poet, playwright, and public intellectual, widely known and published in over twenty countries. The daughter of a Sicilian princess and a renowned ethnologist, Maraini was born in Fiesole, near Florence, and from an early age began journeying with her family, following her father’s research travels in Japan. Maraini became a protagonist of Rome’s cultural scene during the 1960s—the context in which she met and befriended Mario Schifano. In 1973, she was among the founders of Teatro la Maddalena, a women-run theater in the capital that produces some of her most famous plays, such as Maria Stuarda and Dialogo di una prostituta col suo cliente. A prolific author, Maraini’s plays and novels tackle themes such as personal freedom for women, the abuse of power and its effect on women, the histories of women that break free from traditional gender roles, social activism, and women liberation. She has won several important literary awards for her work, including the Formentor Prize for L’età del malessere (1963); the Premio Fregene for Isolina (1985); the Premio Campiello and Book of the Year Award for La lunga vita di Marianna Ucrìa (1990); and the Premio Strega for Buio (1999). Several of her novels have been adapted into successful films by major Italian directors.

This event is made free thanks to funding from: 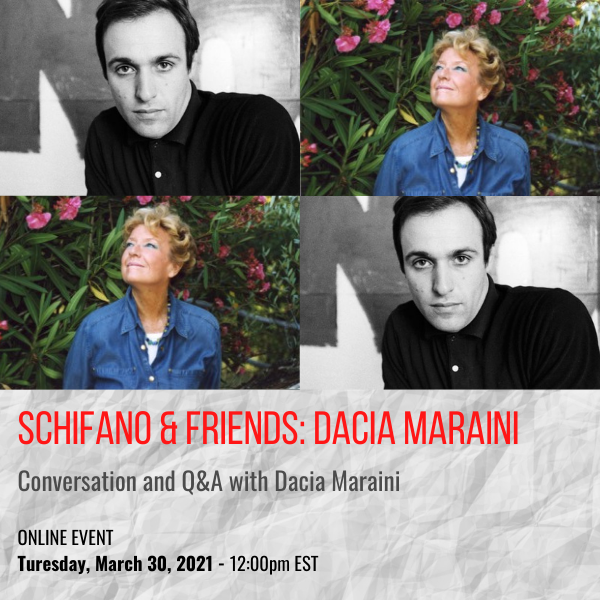