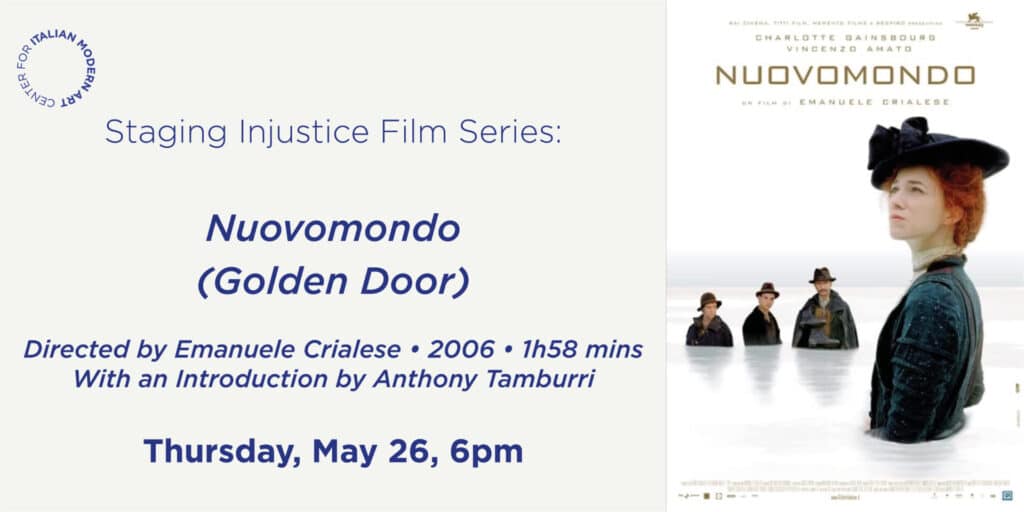 Synopsis (via IMDB): The story is set at the beginning of the 20th century in Sicily. Salvatore, a very poor farmer, and a widower, decides to emigrate to the US with all his family, including his old mother. Before they embark, they meet Lucy. She is supposed to be a British lady and wants to come back to the States. Lucy, or Luce as Salvatore calls her, for unknown reasons wants to marry someone before she arrives to Ellis Island in New York. Salvatore accepts the proposal. Once they arrive in Ellis Island they spend the quarantine period trying to pass the examinations to be admitted to the States. Tests are not so simple for poor farmers coming from Sicily. Their destiny is in the hands of the custom officers.

The film will be introduced by Prof. Anthony Tamburri, Dean of the John D. Calandra Italian American Institute of Queens College, CUNY and Distinguished Professor of European Languages and Literatures. He is co-founder and co-director of Bordighera Press; and past president of the Italian American Studies Association and of the American Association of Teachers of Italian. Concentrating on cinema, literature, and semiotics, he has authored numerous books in both English and Italian. His latest books include Re-reading Italian Americana: Specificities and Generalities on Literature and Criticism (Fairleigh Dickinson UP, 2014); Un biculturalismo negato: La scrittura “italiana” negli Stati Uniti (Franco Cesati Editore, 2018); Signing Italian/American Cinema: A More Focused Look (Ovunque Siamo Press, 2021); and The Columbus Affair: Imperatives for an Italian/American Agenda. (Casa Lago Press, 2021). He is executive producer and host of the Calandra Institute’s TV program, Italics, produced in collaboration with CUNY TV. He also writes a column for La Voce di New York, entitled “The Italian diaspora.”

THIS IS AN IN-PERSON SCREENING AT CIMA.

Public Programming at CIMA is made possible with the generous support of Christie’s.