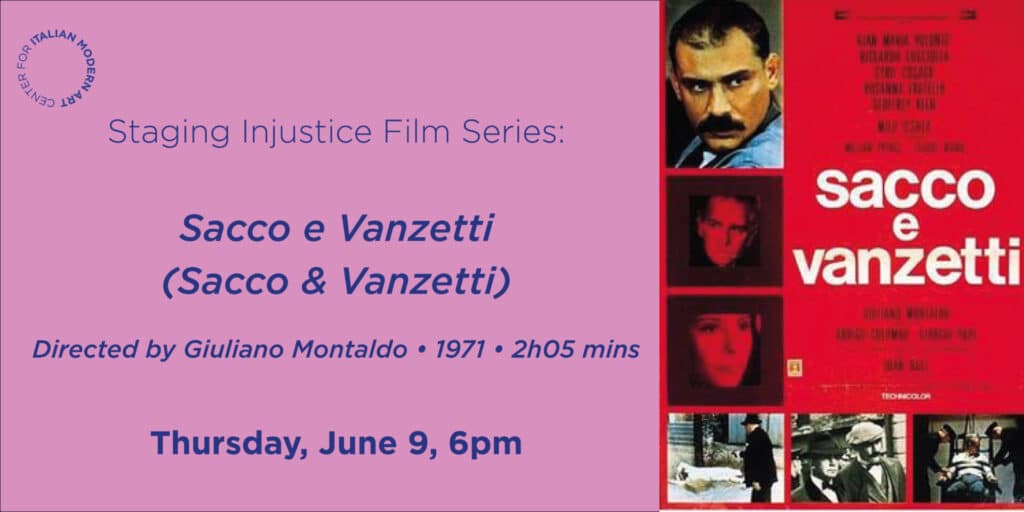 The film will be introduced by Prof. Teresa Fiore, the Inserra Chair in Italian and Italian American Studies at Montclair State University.

Synopsis (via IMDB): Italian immigrant shoemaker Nicola Sacco (Riccardo Cucciolla) and fish peddler Bartolomeo Vanzetti (Gian Maria Volonté) live and work in 1920s Boston, and are known to have anarchist beliefs. When they are accused of robbing and killing two men at a shoe factory, the men’s political leanings are used as evidence in the trial against them. But defense attorney Fred Moore (Milo O’Shea) is convinced of their innocence, so he defends them in one of the most polarizing trials in U.S. history.

Prof. Teresa Fiore received her B.A. in Italy (University of Trieste) and her Ph.D. in the Literature Department at the University of California, San Diego (2002). The recipient of several fellowships, she has been Visiting Assistant Professor at Harvard University (2007), NYU (2008), and Rutgers University (2009). Between 2011 and 2017 she has been a Visiting Fellow at the Center for European and Mediterranean Studies at NYU. As of Fall 2017, she is member of the Seminar in Modern Italian Studies at Columbia University. Fiore is the author of Pre-Occupied Spaces: Remapping Italy’s Transnational Migrations and Colonial Legacies (Fordham University Press, May 2017). Fiore’s essays on issues of Italian migrations, space, and identity have appeared in Italian, English, and Spanish both in journals (Annali d’Italianistica, Diaspora, Bollettino d’italianistica, Zibaldone, El hilo de la fábula) and edited books such as the MLA volume Teaching Italian American Literature, Film, and Popular Culture (2010); The Cultures of Italian Migration: Diverse Trajectories and Discrete Perspectives (Fairleigh Dickinson, 2011); Postcolonial Italy: Challenging National Homogeneity (Palgrave, 2012 – in Italian translation, Le Monnier-Mondadori, 2014).

THIS IS AN IN-PERSON SCREENING AT CIMA.

Public Programming at CIMA is made possible with the generous support of Christie’s.