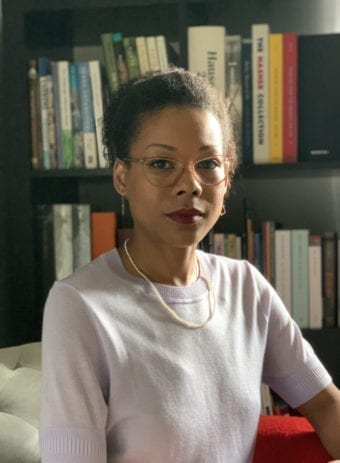 Aja Martin is a doctoral candidate in Art History at Rice University where she studies twentieth-century art and film of Italy. Her dissertation, “Chain of Shadows: Lucio Fontana’s ‘Concetto spaziale, Teatrini,’ and the Modern Grotesque’” addresses that lesser-studied group of shadow-boxes, as well as his “Ambienti spaziali” installations, to suggest how these series chide the artist’s seemingly nihilist claims for painting, proposed both in interviews and in the “Concetto spaziale: Attese” monochrome series. Through careful visual analysis, her project reveals how the series, instead, offer complex formulations of vital boundaries – an act crucial in Fontana’s distinction of works of art from their surrounds and the viewer, from other visual art mediums, and art forms. Given the theatrically-inspired structure of the “Concetto spaziale, Teatrini,” Aja’s project operates within the the broader art-historical dialogue between the theater and modern painting and seeks to extend these ideas toward the filmic frame, also apparent within the shadow box’s structure and color relationships.

Aja holds a Master’s Degree in Art History from Southern Methodist University and has presented her research nationally at graduate conferences, curated numerous contemporary art exhibitions, and served in curatorial departments, institutions and boards across Texas. Her previous research was attuned to the shifting notions of landscape from the medieval to the modern era, with an emphasis on Latin America and the US. Her current work picks up in Argentina, Fontana’s second home and birthplace, but crosses the Atlantic, to Italy, where Fontana would act as an important international conduit connecting with artists across Europe. Aja’s prior research into constructed public and private spaces opened onto notions of technology, vision, and being; which Aja continues to pursue in the work of Lucio Fontana, through his ultimate “spatialist realisms,” the “Concetto spaziale, Teatrini.”

Aja will pursue similar lines of research toward the work of 2020–21 feature artist, Mario Schifano, where she will investigate the artist’s manifestations of presence and absence within hybrid spaces that interface landscape with the framed, even televisual view. Beginning with formal properties, or the thing at hand, she will contribute extensive analyses of select works on display in order to offer new insights on Schifano’s practice, his relationship to American postwar artists, and the temporally dynamic Italian milieu.