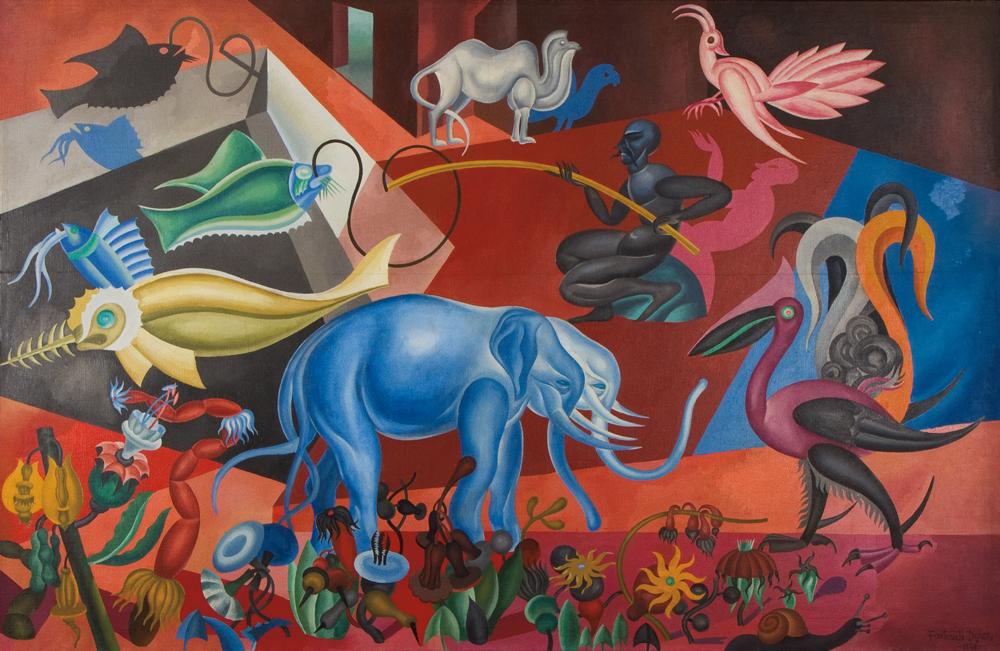 As I mentioned in an earlier blogpost, Depero is a great example of an artist who defined himself as a Futurist throughout his life, while at the same time introducing into his work many references to the past. I wanted to explore this idea a little further, looking at some of his other paintings.

Flora e fauna magica (Magical flora and fauna) [Fig. 1] is one of the most bizarre, imaginative and surprising paintings made by Depero at the beginning of the 1920s. It is not so easy to explain the protagonists of the scene. In the center we can see the main character: a blue elephant with two heads and three tails. Around him appears several animals and plants. In the foreground there is a series of fantastical flowers and shrubs. When you look closer, however, you realize that these plants are not very reassuring—in fact they are almost menacing. And then there is an exotic bird, a camel, and three flying fish. In the middle there is also a fisherman, naked and with a dark complexion. He is fishing in a pool without water. But perhaps we can find the water in the blue on the opposite side of the canvas. Who knows? Note, too, that the fisherman’s shadow is strange; it is purple and completely different from the figure. It is missing the mustache and the fishing rod; but curiously we can find the final part of the fishing rod shadow at the corner of the pool.

Standing in front of Flora e fauna magica we can understand immediately that Depero was an avant-garde artist. The dreamy atmosphere, the stylization of forms, the distorted perspective: everything tells us that this author is a painter of the early twentieth century.

But at the same time Flora e fauna magica is also a picture full of references to art history. Where we have seen a red that intense and pervasive, if not in Roman paintings? Depero has created a sort of tribute to the frescoes of Pompeii, like the works that we can find in the famous Villa dei Misteri (Fig. 2). And if we compare it to another ancient work, a mosaic now preserved in Naples at the Archeological Museum (Fig. 3), we can recognize several other similarities: the choice of the fish, and especially the use of an anti-perspectival method. In both Flora e fauna magica and the Roman mosaic, figures appear as if placed on the surface of the scene without any kind of relation to the landscape. Depero surely knew these Roman antecedents, and he could have seen them in person in 1917 when he spent several weeks on the island of Capri as a guest of the writer and Egyptologist, Gilbert Clavel.

Depero’s interest in antiquity permeates several of his works. Sometimes his quotes can refer to many periods of art history. Take, for example, Città meccanizzata dalle ombre (City Mechanized by Shadows) [Fig. 4]. It is, in the first instance, a sort of tribute to Giorgio de Chirico: we can not imagine a space like this—where perspective and axonometric get confused between them, the colors are completely flat and shadows come from multiple directions—without de Chirico’s Metaphysical city squares.At the same time, the flat colors recall the complementary, saturated and flat colors of Picasso’s works made during his first visit to Rome in 1917 (Fig. 5).

But there are also many quotes from the past. We can easily find famous monuments and buildings, which, even though transfigured, remain recognizable: the Temple of Vesta (Fig. 6), the church of Santa Maria in Trastevere (Fig. 7), and the Palazzo Venezia (Fig. 8). All of them are in Rome, and so Depero’s canvas, which at first glance appears to be a fantastical landscape, is in reality a portrait of Italy’s capital.

Maybe, in Città meccanizzata dalle ombre Depero reveals a quotation from Raffael: the shadow of the woman with a jar on his head brings to mind the muscular woman in the famous fresco called Incendio di borgo painted by Raffael in the Stanze vaticane in 1514 (Fig. 9).

This work was made in 1919. That is not a random date. Just that year, the artist returned from Rome to his birthplace, Rovereto. With his wife Rosetta, he opened the Casa d’Arte Depero. Città meccanizzata dalle ombre became an homage to the city that had hosted them for some five years, and where Depero had first joined the Futurists. What did he think about Rome and what had happened there? In Depero’s canvas the city appears transformed into a deserted landscape, a landscape that had assumed the form of a theatrical space populated only by shadows. It is full of mystery, something that must have been as true for viewers in 1919 as it is today.