Homage to Sciascia: a presentation and talk 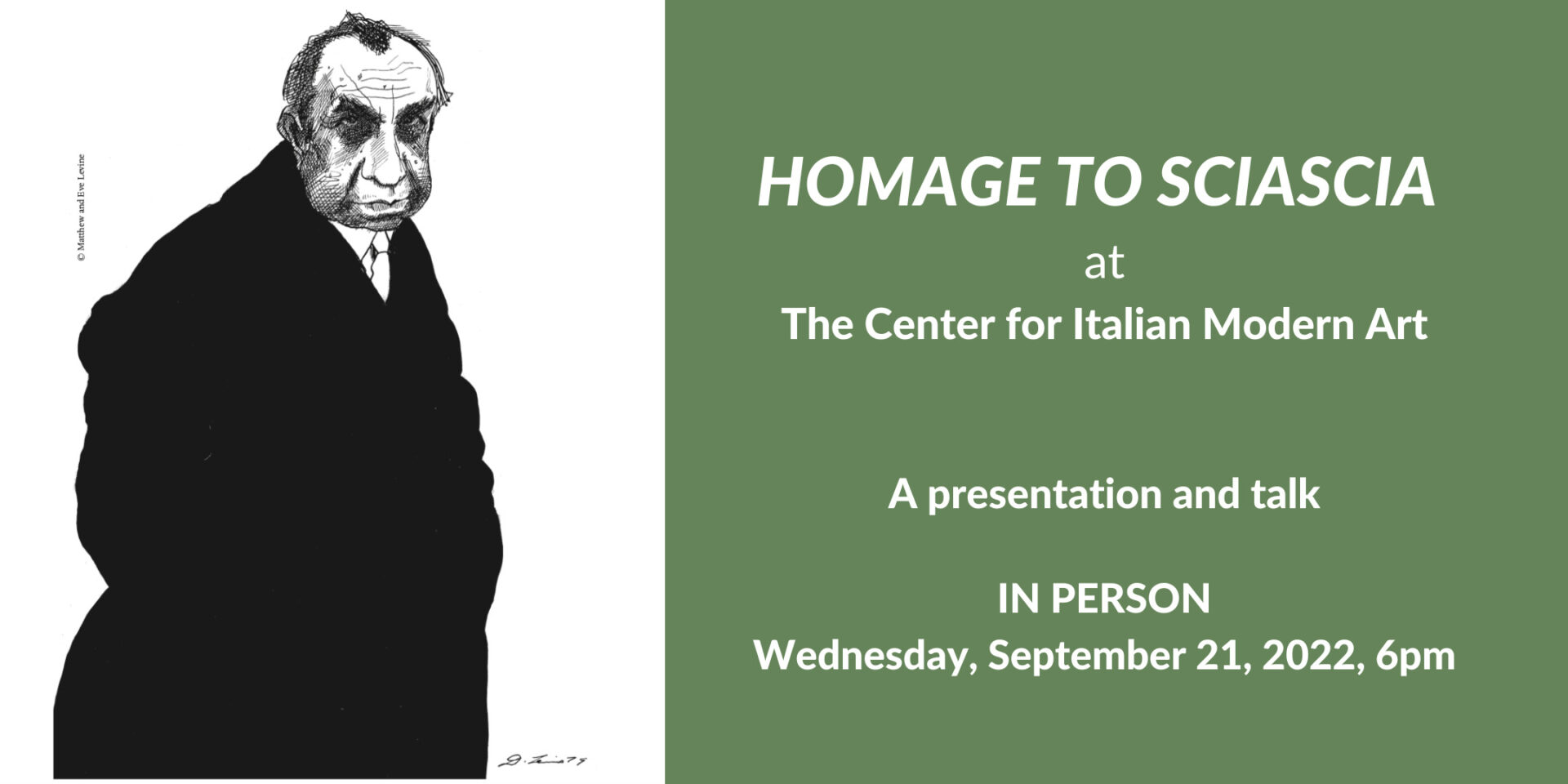 On the occasion of the American celebration of the centenary of the birth of Italian author Leonardo Sciascia (1921-1989), CIMA will host a presentation of the Art Portfolio «Homage to Sciascia», edited by Francesco Izzo on behalf of Amici di Leonardo Sciascia. The art portfolio includes the first English text written by Sciascia and published in the United States in 1952, together with Portrait in Black, a lithograph from an original portrait by David Levine in a numbered, signed and limited edition.

Francesco Izzo is the founder of the nonprofit association Friends of Leonardo Sciascia (www.amicisciascia.it), born in 1993 with the aim to foster the reading, research and discussions on the writer Leonardo Sciascia (1921-1989). After a 13-yr collaboration with the Milan-based publishing house La Vita Felice (resulting in the publication of 25 volumes devoted to Sciascia studies), he led the Association to engage in a fruitful partnership with one of Italy’s oldest and most relevant publishers, Leo S. Olschki (Florence). In 2011 he founded both the book series «Sciascia Scrittore Europeo» and the first international scholarly journal on Sciascia studies, «Todomodo», of which he is co-Editor-in-chief. From the early nineties he is the editor of the graphic art portfolio collection «Homage to Sciascia» (28 portfolios already published) and of the limited-edition catalogs of «Premio Leonardo Sciascia amateur d’estampes» (10 catalogs published in collaboration with the publishing house Il Girasole, Valverde). He also edited three books: Il diritto al caso (Palermo, Sellerio 1992); E Sciascia che ne dice? (Firenze, Olschki 2019); Cento anni di Sciascia in sei parole (Firenze, Olschki 2021). At present he is the Director of Operations of the National Committee for the Centenary of the Birth of Leonardo Sciascia (CNCS).

Valerio Cappozzo is an Associate Professor of Modern Languages at the University of Mississippi. His research focuses mainly on medieval and modern poetry. He has extensively published scholarly articles, edited books, and book chapters in these two fields. His monograph, titled The Medieval Dream Dictionary. The Somniale Danielis in Literary Manuscripts (Leo. S. Olschki Editore, Florence 2018), presents an edition of the widely circulated dream manual from the ninth century to 1550. He is also a co-author with Jacques Dalarun and Sean Field of A Female Apostle in Medieval Italy: The Life of Clare of Rimini, which is now in press for University of Pennsylvania Press. He has also edited volumes on Giorgio Bassani, on the Italian Risorgimento and on Carlo Michelstaedter, Storia e storiografia di Carlo Michelstaedter (University of Mississippi, 2017). He is the President of the Associazione Amici di Leonardo Sciascia, the vice-President of the American Boccaccio Association and co-Editor-in-Chief of the scholarly journal «Annali d’Italianistica».

Teresa Fiore is the Inserra Chair in Italian and Italian American Studies at Montclair State University. Prof. Fiore received her B.A. in Italy (University of Trieste) and her Ph.D. in the Literature Department at the University of California, San Diego (2002). The recipient of several fellowships, she has been Visiting Assistant Professor at Harvard University (2007), NYU (2008), and Rutgers University (2009). Between 2011 and 2017 she has been a Visiting Fellow at the Center for European and Mediterranean Studies at NYU. As of Fall 2017, she is member of the Seminar in Modern Italian Studies at Columbia University. Fiore is the author of Pre-Occupied Spaces: Remapping Italy’s Transnational Migrations and Colonial Legacies (Fordham University Press, May 2017). Fiore’s essays on issues of Italian migrations, space, and identity have appeared in Italian, English, and Spanish both in journals (Annali d’Italianistica, Diaspora, Bollettino d’italianistica, Zibaldone, El hilo de la fábula) and edited books such as the MLA volume Teaching Italian American Literature, Film, and Popular Culture (2010); The Cultures of Italian Migration: Diverse Trajectories and Discrete Perspectives (Fairleigh Dickinson, 2011); Postcolonial Italy: Challenging National Homogeneity (Palgrave, 2012 – in Italian translation, Le Monnier-Mondadori, 2014).

David Leopold is an author and curator who has organized exhibitions for institutions around the country including the Library of Congress, the New York Public Library for the Performing Arts, the Norman Rockwell Museum at Stockbridge, the James A. Michener Art Museum, and the Field Museum in Chicago. Internationally, he has curated shows for the Victoria and Albert Museum in London, the Filmmuseum in Frankfurt and Berlin. He began to organize the David Levine Archive at the artist’s request in 2005 and continues to maintain it for the Levine family. He edited David Levine’s American Presidents (Fantagraphics) in 2008 and is currently working on a retrospective of Levine’s work in collaboration with Harry Katz, former curator of Prints and Photographs at the Library of Congress. Leopold organized the archive of Al Hirschfeld’s work for the artist and is now the Creative Director for the Al Hirschfeld Foundation, where he co-hosts The Hirschfeld Century Podcast. His book, The Hirschfeld Century: A Portrait of the Artist and His Age, published by Alfred A. Knopf in 2015 has won universal acclaim. The Washington Post called it an “instant classic.” Amazon listed it as one of the “Top 100 Books of 2015.” His other books include To Stir, Inform, and Inflame: The Art of Tony Auth (Camino Books 2012), Irving Berlin’s Show Business: Broadway-Hollywood-America, (Harry N. Abrams, 2005); Hirschfeld’s Hollywood (Abrams, 2001). He has also authored monographs on underappreciated artists for various museums. His articles have appeared in The New York Times, The International Herald Tribune, The Guardian, The Pittsburgh Post-Gazette, and Pennsylvania Heritage. In September 2016, Leopold received the Joseph and Joan Cullman Award for Extraordinary Creativity at Lincoln Center in New York.

To view the full program of the American celebrations for the centenary of the birth of Leonardo Sciascia, CLICK HERE.

This event at CIMA is promoted and organized by: