This talk, part of a broader series titled Schifano and Friends will cover the Italian artist’s friendship with poet Frank O’Hara, as well as the reciprocal influence each had on the other.

This series of talks and conversations with art historians, writers, artists, and curators, will highlight thematic and aesthetic intersections between the work of Schifano and that of American artists from the 1950s and 1960s.

Raphael Rubinstein is a New York-based poet and art critic whose numerous books include Polychrome Profusion: Selected Art Criticism 1990-2002,  The Afterglow of Minor Pop Masterpieces and The Miraculous. He edited the anthology Critical Mess: Art Critics on the State of their Practice and is widely known for his articles on “provisional painting.” His poetry has appeared in, among other places, Grand Street, Fence and Harper’s Magazine and in Best American Poetry 2015. From 1997 to 2007 he was a senior editor at Art in America, where he continues to be a contributing editor. He is currently professor of critical studies at the University of Houston. In 2002, the French government presented him with the award of Chevalier in the Order of Arts and Letters. In 2010, his blog The Silo won a Creative Capital/Warhol Foundation Arts Writers Grant. In 2014 The Silo was given a Best Blog Award of Excellence by the International Association of Art Critics. In April 2017, The Miraculous: Houston, a public-art installation by artist and wife Heather Bause Rubinstein, based on his book The Miraculous, debuted as part of the CounterCurrent Festival. 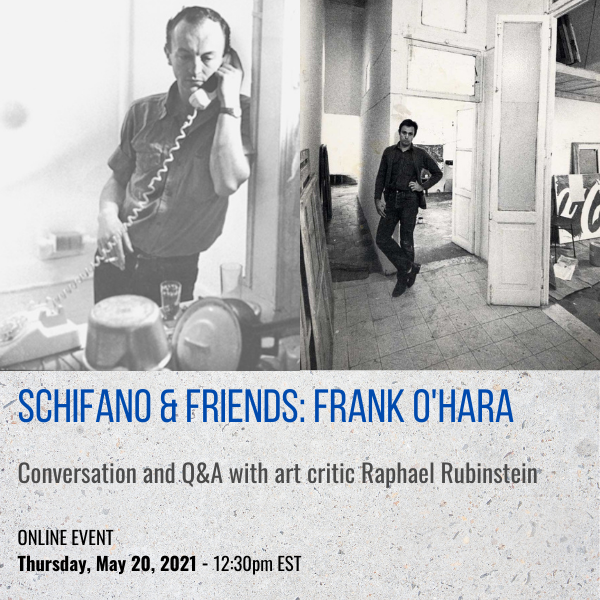 This talk and Q&A, part of a broader series titled Schifano and Friends, will explore the relationship between Larry Rivers’ work and that of Mario Schifano.

A talk by David Joel, Executive Director of the Larry Rivers Foundation, with the participation of “Facing America” curator Francesco Guzzetti. The talk will focus on the life and art of Larry Rivers, while looking at connections to Mario Schifano’s art.