Bruno Munari: The Lightness of Art

Dubbed a ‘Leonardo Da Vinci and Peter Pan’ of the modern world, Bruno Munari played a key role in practices as wide ranging as concrete abstraction, kinetic art, multiples and xerograph art. He also gained international recognition in industrial and graphic design, through signature objects such as his Falkland lamp (1964) and Abitacolo (1971), advertising material for firms including Campari, and editorial work for Domus and publishing houses such as Einaudi and Bompiani. Munari left an indelible mark as a design theorist and as a children’s author and educator, through the artistic laboratories he toured globally from the mid-1970s.

Bruno Munari: The Lightness of Art (Peter Lang, 2017) constitutes an unprecedented study of the artist. Through original archival research and illuminating comparisons with other artists and movements both within and outside Italy (from Dada and surrealism to Lucio Fontana, Paolo Gilardi and structural cinema), the essays gathered in this volume offer novel readings of both more familiar aspects of Munari’s career (such as his photo-essays of the 1930s and 1940s) and heretofore neglected aspects (including his light projections and performances). Pierpaolo Antonello will introduce this evening, which coincides with the twentieth anniversary of Munari’s death; his discussion will be followed by short presentations from the evening’s panelists, Nicola Lucchi, Ara H. Merjian, and Maria Antonella Pelizzari, Greg D’Onofrio, and Steven Guarnaccia.

Please note: CIMA will be live-streaming the program on our Facebook page.

Pierpaolo Antonello is a Reader in Italian Literature and Culture at the University of Cambridge and Fellow of St. John’s College. He specializes in twentieth century Italian literature, culture, and intellectual history. He is the co-editor of the series ‘Italian Modernities’ for Peter Lang, which released The Lightness of Art at the end of 2017. His contribution to the volume considers Bruno Munari’s natural forms.

Greg D’Onofrio is a designer and educator, and cofounder of Kind Company and Display, a graphic design collection. Greg has curated, lectured, and authored essays on twentieth-century modern graphic design history. He teaches the history of graphic design at the School of Visual Arts. With Steven Heller, he is the author of The Moderns: Midcentury American Graphic Design (Abrams, 2017).

Steven Guarnaccia is the chair of the Illustration Program at Parsons The New School for Design. He is a former art director of the New York Times Op-Ed page, and his illustrations have appeared in books and magazines. He is the author of Black and White (Chronicle, 2002) and co-author with Steven Heller of School Days (Abbeville, 1992) and Designing for Children (Watson-Guptill Publications, 1994). His drawings for the exhibition Achille Castiglioni: Design! at the Museum of Modern Art were published as a book by Corraini Editore. Guarnaccia has received numerous honors from AIGA, the New York Art Directors Club, the Society of Publication Designers, and other professional organizations and was a Hallmark Fellow of the Aspen Design Conference.

Nicola Lucchi is Substitute Lecturer of Italian at Queens College, CUNY. He is currently working on his first monograph, dedicated to Fiat Lingotto and the impact of automobile mass production on Italian culture during the interwar years. Lucchi’s essay ‘”The Great Painter Paints the Baker’s Sign’: Bruno Munari and the Art of Advertising” begins the volume’s third chapter, “The Everyday Spectacle of Art.”

Ara H. Merjian is Associate Professor of Italian Studies at New York University, where he is an affiliate of the Institute of Fine Arts and the Department of Art History. He is the author of Giorgio de Chirico and the Metaphysical City: Nietzsche, Paris, Modernism (Yale University Press, 2014), and Against the Avant-Garde: Pier Paolo Pasolini, Contemporary Art and Neocapitalism, 1960-1975 (University of Chicago Press, 2019), for which he received a Creative Capital/Andy Warhol Foundation Art Writers Grant. He is a contributor to frieze, Art in America, and Artforum.

Maria Antonella Pelizzari is Professor of Art History at Hunter College and the CUNY Graduate Center. She is the author of Photography and Italy and has recently contributed to Luigi Ghirri, The Map and the Territory (MACK, 2018). She is working on a book project on photography in the printed media in 1930s Italy and is co-editing an anthology, Print Matters: Histories of Photography in Illustrated Magazines. Her essay, “The Charade of Bruno Munari’s Photo-reportage (1944)” appears in the volume’s second chapter, “Designing and Subverting the Page.” 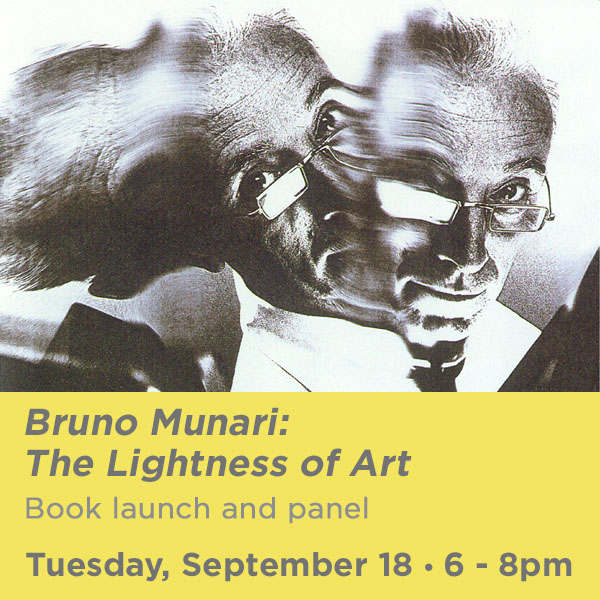