Join us for a talk on Alberto Savinio by renowned Italian art historian and critic Renato Barilli. Barilli will focus in particular on the nature of Savinio’s relationship with his better known brother, Giorgio de Chirico (a subject of the 2016-17 season at CIMA). He posits that if Giorgio, the elder of the two, received full protection and place of pride from their mother, Alberto, the younger, accepted his reduced consideration from their mother with humility, avoiding any competition with his sibling. So, in the first phase of his existence Alberto limited his activity to the field of music, and as far as the visual field, resigned to be only the herald of Giorgio’s talent, becoming the best theoretician of “Metafisica”. But in 1926, the period covered in CIMA’s exhibition, Alberto dared to defy the prohibition established by de Chirico to become a painter. Their common poetics, their metaphysical art, diverged in interesting ways. Giorgio used to cultivate such escape from banal reality, mainly by insisting on icons collected in the museums, recognized by the history of art. Alberto in contrast reserved to his painting a kind of lateral issue, searching for his themes in the world of animals, or in a systematic cultivation of the different ages of geology. To see these different approaches, nothing is more profitable than to compare the two artist’s portraits of their beloved mother. De Chirico’s is magnificent, solemn, sacred; Savinio’s, perhaps on account of being humiliated by her, was cruel, humorous, derisive, placing the head of a hen on her body, very prosaic, very vulgar. In the same manner, if his brother referenced magnificent aspects of past glories, such as ruins, monuments, solemn statues, Savinio depicted a childish world of toys, very near to kitsch.

Renato Barilli, professor emeritus at the University of Bologna, where he has taught for four decades, is one of the most important art historians and critics of the postwar period in Italy. He has pioneered the subject of “the phenomenology of style,” a field that focuses on the visual arts but extends as well into literature. His primary book on the topic, The Science of Culture and the Phenomenology of Styles, was published in English in 2012. A curator as well as the author of numerous essays and books, Barilli is particularly noted for his focus on postmodernism and the artistic movement he dubbed the Nuovi-Nuovi (the New New). He invites you to visit his blog, www.renatobarilli.it, where every Sunday he posts three essays linked to his prevailing interests in the visual arts, literary criticism, and politics. 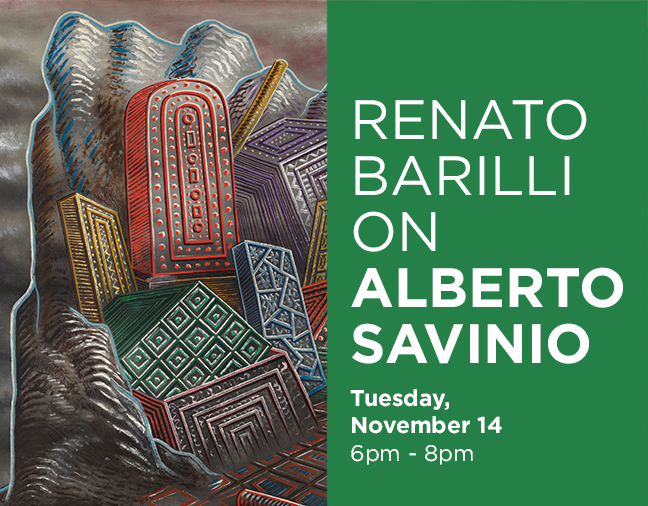