For its fifth season, CIMA – The Center for Italian Modern Art was proud to present the first exhibition in the United States of the work of Alberto Savinio (1891–1952) in over two decades. Hailed by poet and critic Guillaume Apollinaire as the paragon of a Renaissance man, Savinio was not only an exceptional visual artist and member of the Parisian avant-garde, but also a gifted pianist, composer, musicologist, set designer, critic, and writer. Yet despite his achievements, Savinio, the younger brother of Giorgio de Chirico, is today virtually unknown outside of Italy.

Alberto Savinio featured 25 rarely seen works by the artist, focusing on paintings produced after his move to Paris in 1926, when he put his other creative pursuits on hold in order to devote himself fully to visual arts. The exhibited works were characterized by Savinio’s vivid color palette, his fantastical interpretation of mythology and voyage, and his eccentric vision of landscape.

Continuing CIMA’s practice of introducing work by contemporary artists in dialogue with the principal subject, the installation also featured select sculptures and prints by French-American artist Louise Bourgeois (1911–2010). This juxtaposition, explored in a conversation program with Robert Storr and Lawrence Weschler, brought to the fore the two artists’ commonalities, including their flirtation with Surrealism, shared interest in the subconscious, their roots in the grotesque, and the profound influence that familial relations had on their respective artistic imagery.

The season’s rich array of public programming explored many aspects of the artist’s multi-faceted career: his music, his literature, his theater work, as well as his art-making. Highlights included a Study Day organized by CIMA’s fellows, featuring speakers from Italy, the U.S., Germany, and Mexico, and a Study Day dedicated to the art dealer and patron Léonce Rosenberg; presentations by Savinio’s son Ruggero Savinio and also by his granddaughter Enrica Antonini; artist talks by a number of contemporary artists, including the Oakes Twins, Lucas Blalock and Saya Woolfalk; talks by renowned publisher and author Roberto Calasso, esteemed professor Renato Barilli, and the late Irving Sandler. Franco Baldasso introduced Savinio’s literary works to CIMA’s audiences, and in a collaboration with the Italian Institute of Culture, Luciano Chessa and Luca Valentino explored Savinio’s career as a composer. The season closed with Isabella Rossellini in conversation with Yasmine Ergas on the legacy of 1968 in Italy, and the U.S. premiere of Savinio’s 1914 avant-garde operetta, Les chants de la mi-mort (The Songs of the Half-Dead), curated by Lauren Rosati and performed at ISSUE Project Room in Brooklyn.

With the patrocinio of: 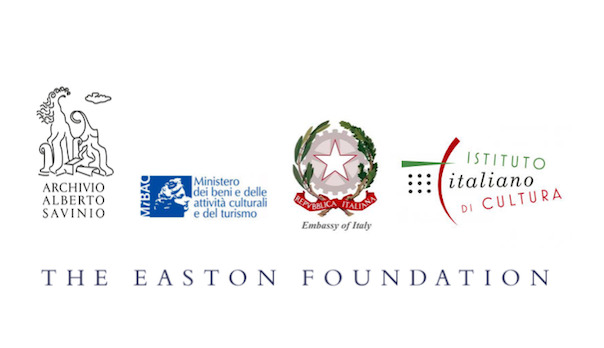 Thanks to our in-kind sponsors: