BRUNO MUNARI: THE CHILD WITHIN

For its Fall-Winter 2022 season, the Center for Italian Modern Art (CIMA) will present Bruno Munari: The Child Within, scheduled for October 6, 2022 – January 14, 2023. The show will focus on Munari’s children’s books and will demonstrate how his experimental and commercially produced publications expressed his wide-ranging ideas about the possibilities art offered to communicate visually. Play is at the heart of even Munari’s most serious production, and his work across genres, formats, and disciplines is all of a piece. Bruno Munari was an artist, inventor, graphic designer, and a designer of objects. The totality of his work can perhaps be best understood through the lens of the children’s books he wrote, designed, and illustrated. These books bring together his ideas regarding art, design, and pedagogy in an accessible form. It was Munari’s goal to develop a purely visual language that fostered new modes of communication, often without needing words. In the 1940s he started to create his series of “unreadable books,” completely devoid of text, but full of tactile and visual expression. From these, he removed the elements readers traditionally identify with books: title, author name, copyright pages, table of contents, running text, etc. His goal was to emphasize the grammar of the book as object, through its form, color, proportions, and rhythm. The “unreadable books” featured a wide variety of colored pages, paper stocks, textures, formats, and shapes. They might be pierced by threads and marked with spots or lines or create a kinetic illusion through transparent or overlapping pages. These books were not designed just to be seen, but as objects with which to interact playfully and imaginatively. Between 1945 and 1968 Munari produced a remarkable array of books that exemplify the ideas and achievements of his broader career: an unerring graphic sensibility, elements of surprise and humor, and a fluency with the mechanics of book-flaps and holes within pages, which contribute to the narrative qualities of these publications as much as their words or images. Munari’s books for children weave together all the threads of his theoretical and creative practice, thus, the show at CIMA will underscore the artist’s various areas of activity through these works. For a contextual framework, the exhibition will also feature artist books from other cultures, including Russian revolutionary children’s books that played a role in Munari’s own formation and approach to the genre. Furthermore, the presentation will include artworks and design objects by Munari that share themes — as well as visual and formal connections — with his children’s books.

Bruno Munari (Milan, 1907– Milan, 1998) was one of the most independent and influential figures in the history of twentieth-century international art, design, graphics, and film. Associated with the second wave of the Italian Futurist movement, and one of the founders of the Italian movement for concrete art—Movimento Arte Concreta (MAC), his multifaceted practice allowed him to contribute to all fields of the visual arts, as well as literature, poetry and teaching. He is considered one of the protagonists of programmed and kinetic art. Munari’s experimentations with movement, light, and organic and mechanical motions was often accomplished through the use of new technology, such as Xerox machines. His brilliance did not go unnoticed: for the duration of his artistic career, Munari collaborated with titans of Italian literature and culture, especially in the field of publishing. These partnerships took many forms across the years: starting in the early 1950s, he began to design book series covers for Einaudi (Piccola biblioteca Einaudi, Nuova universale economica and Nuovo Politecnico). In 1963, he illustrated Gianni Rodari’s famous children’s book Favole al telefono (Telephone Tales), also published by Einaudi. His work in furniture and industrial design led him to receive the prestigious Compasso d’oro design prize four times (including once for a lifetime of achievement). He also received awards from the Japan Design Foundation (1985), and the Accademia dei Lincei (1988), as well as an ad honorem laurea in architecture from the University of Genoa. His books for children, translated around the world, made him an internationally-renowned figure. His work has been exhibited widely in Italy, including at the Triennale di Milano (1933, 1936, 1940, 1957), The Galleria Nazionale d’Arte Moderna in Rome (1955), and in dedicated rooms at the Venice Biennale (1966,1986). Munari has also been frequently exhibited internationally, notably in New York (including at MoMA), Paris, and Tokyo. Retrospectives on his work have been held in 1965 at the Isetan department store in Tokyo, and in 1986 at the Palazzo Reale in Milan.

Steven Guarnaccia is an illustrator and Professor Emeritus at Parsons School of Design. He was formerly Op-Ed art director of the New York Times. His work has appeared in major magazines and newspapers including The New York Times, Abitare and Rolling Stone, and he has created murals for Disney and exhibition drawings for the Museum of Modern Art. He is the author of books on popular culture and design for Chronicle Books, including Black and White and A Stiff Drink and A Close Shave. He has designed watches for Swatch and greeting cards for the Museum of Modern Art, won awards from the AIGA, the Art Directors Club, and the Bologna Book Fair and has had one-man shows internationally. His children’s books include his fairy tales about design, The Three Bears: A Tale Moderne, The Three Little Pigs: An Architectural Tale and Cinderella: A Fashionable Tale, all published by Corraini and Abrams. His latest book is Butterflies, Snails and Little Worms, about pasta names, published by RaumItalic. His exhibition, Fatherland, was shown at the Hamelin Gallery and has traveled to the East London Comic Arts Festival, the Barcelona FLIC festival, the Ministerium für Illustration, Berlin, the Tabook Festival in the Czech Republic, and to Yui Gallery, NY.

‘Bruno Munari: The Child Within’  is organized in collaboration with Corraini Edizioni, under the patronage of the Embassy of Italy in Washington and the Istituto Italiano di Cultura, New York. The exhibition is made possible with support from Sonus faber.

Explore the exhibition on our free digital guide. 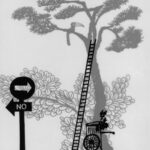 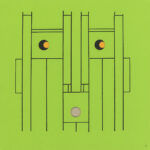