On Monday, August 30, 2021, CIMA members were treated to a group visit to the Jewish Museum to view the “Louise Bourgeois, Freud’s Daughter” exhibition, curated by Philip Larratt-Smith. The exhibition unpacks Bourgeois’ relationship with freudian psychological theories by tapping into the childhood trauma that encumbered Bourgeois for the entire duration of her life. 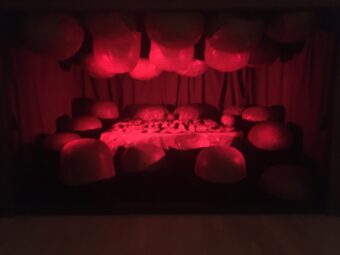 In Destruction of the Father (1974, exhibition replica 2017), for example, Bourgeois attempts to desublimate her feelings of betrayal towards her father, Louis, who repeatedly betrayed her mother with the family au pair. Massive, rounded forms surround a plinth covered in what appears to be skin. The structure could be interpreted as both a bed (the scene of her father’s flagrant crimes against the family), and a dining table (suggesting Bourgeois’ desire to consume her father while at the same time integrating herself with him). The mounds of formless, rotting meat that cover the platform reflect Bourgeois’ desire for the psychological decomposition of her father’s memory from her mind. 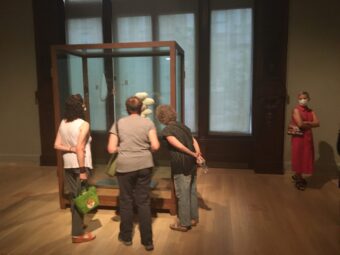 In addition to Bourgeois’ artworks, the exhibition showcases some of her psychological writings from the 1950s and 60s; this is the first time they are being exhibited in the United States. After the death of her father in 1951, she underwent a period of psychoanalysis with Dr Henry Lowenfeld, in an attempt to cure her depression. Though Bourgeois continually professed to being skeptical of the medium, her written works reveal her some of her deepest-seated neuroses and obsessions during a period in which she practically withdrew from the art world. Violence is a recurring theme in Bourgeois’ written works. The opening of one of these entries is particularly striking:  “How much violence is there in you today – / how should I know, / how can I possibly find out?/ there are ways.”. 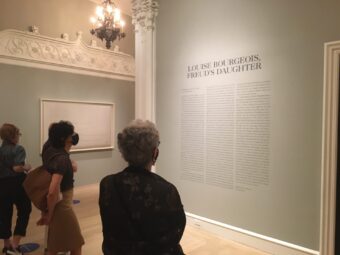 CIMA wishes to extend its thanks to The Jewish Museum for being our gracious hosts for the afternoon and looks forward to reciprocating the hospitality in the near future.

“Louise Bourgeois, Freud’s Daughter” is on view at the Jewish Museum through 12 September 2021.