This week, CIMA members had the opportunity to attend not one, but two exciting and exclusive museum visits.

On September 20th, our members were treated to a tour of Magazzino Italian Art in Cold Spring, NY. The tour was divided into two equally fascinating parts: first, Magazzino fellow Dr Katie Larson guided CIMA members through Magazzino’s extensive collection of Arte Povera, then museum director Vittorio Calabrese took the helm to guide us through a temporary exhibition dedicated to the sand reliefs of Costantino Nivola, titled “Nivola: Sandscapes”. 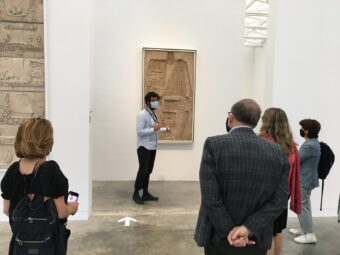 A particularly interesting work within the permanent collection is Michelangelo Pistoletto’s Adamo ed Eva (Adam and Eve, 1962-1987). The work is one of Pistoletto’s quadri specchianti; like all works in the series, the artist has placed these two figures onto a highly polished stainless steel panel. Though we may not visually recognize the couple as Adam and Eve (due to their modernity), the striking shame that their figures exude betrays their identity. 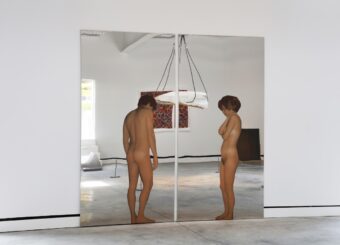 By putting the figures onto a mirrored surface, Pistoletto exposes the viewer to Adam and Eve’s naked embarrassment, both frontally and through the reflection. The viewers see their own likenesses in the polished steel plates; in a way, Pistoletto exposes them to their own voyeurism. Some of Adam and Eve’s shame rubs off on the viewer, which recalls the traditional church doctrine that claims that Eve’s original sin stains all of us.

Two days later, CIMA participated in a special after-hours tour of the “Shahzia Sikander: Extraordinary Realities” exhibition at the Morgan Library & Museum, led by educator Azi Amiri. CIMA members had the normally packed room, which features Sikander’s early miniatures, all to themselves. Amiri highlighted Sikander’s interest in Indian and Persian miniatures, and the ways she often harnessed this passion to make political statements. It is interesting to note the recurring symbols Sikander includes in her work, like isolated traditional hairstyles, or womb-like figures. Sikander attempts to address her often conflicting identities as a muslim, as a woman, and as an immigrant throughout the exhibition. 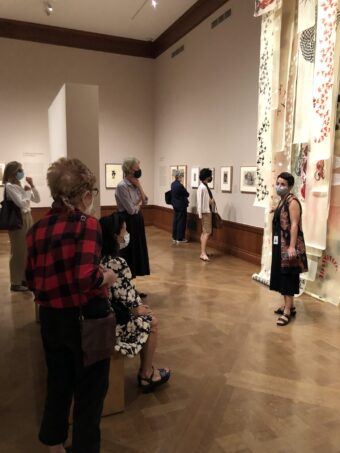 A massive thank you to Dr Katie Larson, Vittorio Calabrese, Azi Amiri, and all of the staff at both Magazzino Italian Art and The Morgan Library & Museum for making these visits possible!