Yesterday CIMA and Elizabeth Street Garden were delighted to host the final instalment of Beyond the Canvas: Schifano and Film, in collaboration with the Cineteca Nazionale.

As our guests started to arrive, the impending rain came ever closer to the bucolic garden rendering the air heavy and sticky. Luckily, the fates showed mercy and spared us from the storm, with just enough time to screen two of Schifano’s short films: Reflex (1964, 8 mins) and Souvenir (1967, 11 mins). 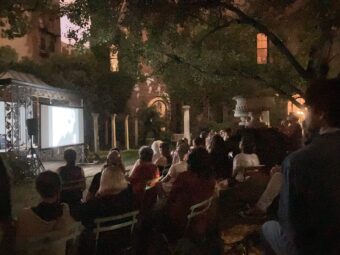 CIMA fellow Biancalucia Maglione gave superb introductory speech to the films. The following is an adaptation of her remarks.

Reflex is the first experimental short shot in America by Schifano. It is focused on the figure of the fashion photographer Bob Richardson, while portraying some models in his studio during a photoshoot (a theme similar to the one of Blow up the famous film shot by Michelangelo Antonioni two years later, in 1966). Schifano himself is also present in this film, you can see his image reflected in a mirror, holding his camera, as signified that the real focus here is on the media itself, not on the models or on the photographer. At a certain point we see one of the models taking a swig from a bottle of Coca-cola, a recurring theme in Schfiano’s oeuvre.

In the second film, Souvenir, Mario Schifano films Peter Hartman and Gerard Malanga during their visit at the St. Peter’s Basilica in Rome.

Schifano and his friends wade their way through the masses of visitors to the basilica. Their bodies and their unusual “performances” and dances form a sort of contrast to the new religion of mass tourism, which Schifano immortalizes in its most common, stereotypical – in a way pop – details.

Although most of these first Schifano experimentations have no sound, in this case we can hear in the background a music and a voice (probably Malanga), reciting poems, in a sort of litany that accords well with the atmosphere of this new kind of “religion” that permeates the film.

At the end of the film, we the protagonist inject himself with an illicit substance on top of Gian Lorenzo Bernini’s famous colonnade. The director seems interested drawing a parallel between the desecrating behavior of the protagonist in the holy place and the blasphemous speculation around the sale of sacred images.

In both the shorts, as usual for Schifano at the time, the camera is never fixed on the tripod, the images are unstable, sometimes changing from negative to positive, skewed or upside down. The camera, often filmed, is at the same time operative tool and plastic subject. In Schifano’s films there is no conception of time or narrative development. The real protagonist here is not the subject represented but the way in which the images are perceived by the viewer. 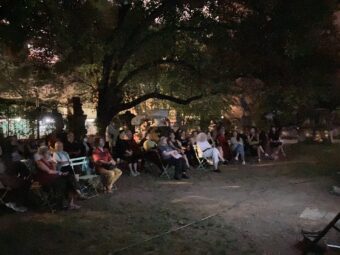 We extend our sincerest thanks to the Cineteca Nazionale in Rome for lending us these films, of which only two copies exist. We would also like to thank our friends at Elizabeth Street garden for hosting us, and above all, our public for making the night such a success, despite the threat of rain!