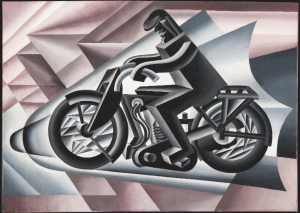 In honor of the opening today at the Juan March Foundation in Madrid of the exhibition Depero Futurista, 1913-1950, we are pleased to present a guest post by Gianluca Poldi, a post-doctoral researcher in conservation science at the University of Bergamo, Italy.

I believe that a well-structured set of scientific exams can shed new light on an artist’s work.

With this in mind, in 2013 I undertook a large diagnostic campaign—performed with non-invasive methods—on ten paintings, several watercolors and drawings, and some sculptures by Fortunato Depero, all created between 1916 and 1927.

Among the most interesting outcomes of my research were the results obtained on Motociclista – Solido in Velocità (Biker, Solidified in Speed), oil on canvas, 117 x 163.5 cm. Infrared tests, i.e. IR reflectography and transmitted IR, revealed that the words “MOTOCICLI BIANCHI” had been painted in capital letters at the top left, with “motocicli” compressed in order to fit into the same length of the word “Bianchi”. Infrared reflectography gives us the opportunity to see underneath the painted surface, to discover previous iterations of a work, under-drawings, changes, and other hidden details. If the artwork is done on canvas, we can also retrieve this information—sometimes with even better results—using transmitted infrared imaging, in which the light source is positioned behind the canvas instead of in front of it. 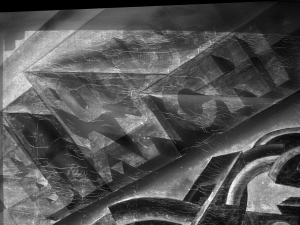 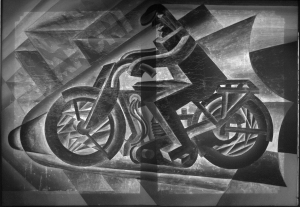 The letters were painted with diagonal shadows and a kind of 3D effect. The typography chosen—with a triangle replacing the horizontal bar in the letter A, for example—is similar to one used by Depero in several other projects. It can be seen in the Vanity Fair covers he made in New York between 1928 and 1930, some Campari advertisements made around the same period, and a 1924 poster for “Cicli Bianchi.”

Bianchi was a famous Italian brand of bicycles and motorcycles. They still make bicycles today. Around the time of World War I, it was the most important Italian firm making single- or double-cylindrical motorbikes. In 1924 it started producing a new racing motorbike with one cylinder, the 350 cc named “Freccia Celeste” (Blue Arrow)—a bike that garnered 95 victories from 1925 to 1930. 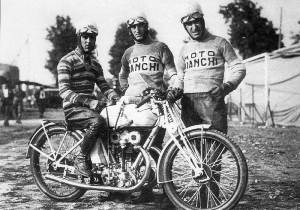 The famous race car and motorbike champion Tazio Nuvolari (“The Flying Mantuan”) was inextricably linked to the Bianchi brand and brought the company great international success.

The model of the motorbike in the painting is a synthetic representation, and it is not possible to identify it for certain. It seems to be a vertical mono-cylinder, without the exhaust pipe on the back, such as can be seen in the model 175p of 1926, or perhaps the Bianchi C 75A of 1920, or some models of 1922, with a rear rack and curved handlebars. 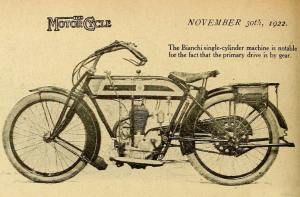 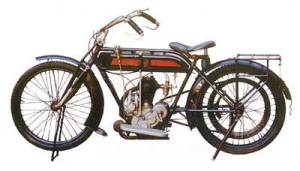 This painting of Depero’s has historically been dated 1923, or, as seen in a photographic plate conserved in the Archives of the MART at Rovereto, 1925. But we have learned from research conducted by Giovanna Ginex for her presentation at the Depero Study Day on February 21, 2014, that Depero tried to collaborate with Bianchi, pitching a new advertising campaign to them. In a letter of July 1928, Edoardo Bianchi rejected Depero’s proposal, saying he was not interested in the US market! Ginex found a similar letter in the Pirelli archives dated June 1928, in which Depero designed a poster promoting the tire manufacturer that he proposed to bring to the United States (a proposal that was also rejected).

So, we can probably conclude that Depero proposed an advertisement campaign to Bianchi using one of his favourite mediums: oil painting. He designed the image to catch the interest of the potential customer, and he wished to bring it to the US. It could very well be the first version of our Motociclista, the one revealed in the IR exams. With this hypothesis, the painting is more likely to be dated around 1927.

When Depero painted the large subject, presumably in 1927 or in the first months of 1928, he didn’t concern himself with the latest motorcycle models; for him it was not the model that was important, but the dynamic idea that the biker represented.

After Bianchi refused the picture, Depero painted out the words “MOTOCICLI BIANCHI” and turned the advertisement into an autonomous painting, coherent with other works of his of that period. It’s a classic example of a Futurist work, with the man becoming one with the machine, and the jagged background emphasizing speed.

When Depero left Italy for New York City in 1928, this painting accompanied him. In fact it is recorded as no. 7 in Depero’s list of works he brought to New York. Some cracks of the pictorial film, more evident in transmitted light, can be attributed to the rolling of the canvas and the wear of the transport. Apart from this top left area, where the writing was, it doesn’t seem that Depero reworked or repainted other zones of the canvas, like he did in the 1940s with so many of his earlier works. Some lacuna permit us to see the color under the final layer; some grey-purple zones were originally blue or blue-ish, and some pale pink areas were darker.

This project of scientific analysis was supported by CIMA and by the Juan March Foundation of Madrid, which hosts the exhibition Depero Futurista, 1913-1950, from October 10, 2014 to January 18, 2015. The results of my studies, which were previewed at CIMA during the Depero Study Day (February 21, 2014), will be relayed in full in the Madrid exhibition. Depero’s Motociclista will be there, as will many of the other works that were on display at CIMA during its first season. Hope to see you in Madrid!

Transmitted infrared photograph of Depero, Motociclista, and a detail of same. Photo by author.