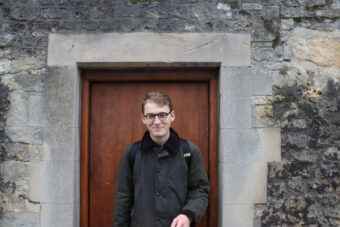 My dad was a printmaker when I was growing up and he taught me how to create monotypes and etchings, but I never really fell in love with art until I had a really good art teacher who encouraged me to paint abstractly and read criticism and history of art. I was drawn to the rationalist humanism of Josef and Anni Albers and the intense emotion of Abstract Expressionism. I began expanding my knowledge and thinking from there, eventually becoming a student of Modern and Contemporary Art at Sarah Lawrence then at Wadham College at University of Oxford for one year.

Do you have a specialization or specific interest?

My specialization within Modern and Contemporary Art is cultural and creative exchanges between Europe and the Americas as well as the relationship between concept and material form in art. I’m researching this notion for my senior thesis at Sarah Lawrence, tentatively titled To Spring New Realities: Mathematics and Emotion in Concrete and Neoconcrete Art 1930-1961. At a certain point towards the end of the 19th century European mathematicians began developing highly abstract systems including Topology, Group Theory,  and Set Theory. Modernist artists started to learn about these new systems and adapt them to rhetorics of purity and autonomy. I’m concentrating on the transition from the rationality of Concrete Art towards a more expressive and participatory notion of art among the Neoconcretists. The Concrete Art movement was founded with a manifesto in 1930 by a pair of Swiss artists, architects, and designers Max Bill and Theo Van Deosburg who began to search for a principle of unified purity in art. Bill was a passionate amateur mathematician and shared this interest with artists in Sao Paulo and Rio de Janeiro, Lygia Clark, Helio Oiticica, Lygia Pape, among them. Interestingly, the Bardi family was involved in this creative flourishing. Pietro Maria Bardi collaborated with Max Bill and many others to establish the Sao Paulo Museum of Art (Museu de Arte de São Paulo) in 1947 and Lina Bo Bardi later designed the headquarters for the museum in 1968. I might be exemplifying what architect Manfredo Tafuri calls “the mole-like vision of the scholar” but I love the worlds my research leads me to and I’m excited to learn from everyone at CIMA.

What are some lesser known artistic sights that are unmissable, in your opinion?

Christ’s Church Cathedral in Oxford for the chancel vaulting and the Unesco World Heritage Site, Chaco Canyon for the ancient city planning.

If you could own any work of art what would it be and why?

I think a painting modern and careful with an interesting composition so Paris Street Rainy Day (1877) by Gustave Caillebotte. It’s a gorgeous painting with a fascinating social and historical context in my opinion. Just 7 years after Haussmannization and with these gray textures balanced with the elegant soft lavender color of the umbrellas even Zola was convinced it’s great. On second thought, Caillebotte’s masterpiece is for everyone to enjoy at the Art Institute of Chicago so I’d have to find something fascinating on a smaller scale like Leonardo’s recto verso drawing in red chalk of a stand of trees from, I believe, 1500.

What are you hoping to gain from an internship at CIMA?

I’m excited to be learning from the fellows and the paintings at CIMA as I continue my close study of Modern and Contemporary Art. My first experience at CIMA was during a class field trip led by professor of Italian Literature at Sarah Lawrence, Tristana Rorandelli to Metaphysical Masterpieces 1916-1920: Morandi, Sirroni, and Carra. Morandi’s attentive Platonic painting captured me then and I’m excited to learn more about the Metaphysical painters from the books in CIMA’s library. Finally, the lectures, the discussions and the lunchtime conversations with everyone here at CIMA will enrich my experience at the center as an intern.